James K. Estes was the son of Mary Jane “Jennie” Justice and her husband Peter Estes.  He was born in Morgan County, Tennessee in 1844.  His story has been previously shared in another format in tribute to those family members who lost their lives as a result of war.  On March 15, 1863, he traveled from Morgan County to Somerset, Kentucky to enlist in the Union Army, as Tennessee had followed other Southern states and seceded from the United States to form the Confederate States of America.  As with many East Tennesseans, James was very loyal to the United States and wanted to serve in the Union Army.  He enlisted in Company F, 3rd Tennessee Volunteer Cavalry Regiment, and proceeded to Nashville, Tennessee on August 31, 1863.  He was then mustered in to the Union Army as a Corporal.

He was involved in several campaigns across Tennessee, and then eventually wound up in September of 1864 in Athens, Alabama.  His regiment was involved in the Battle of Sulfur Branch Trestle on September 25, 1864, and CPL James K. Estes and much of the regiment were taken into captivity by the Confederates.  The captives were marched to the POW camp at Cahaba, Alabama.  Conditions at the POW camp were deplorable, but he survived in spite of few rations and no sanitary water supply.  He was imprisoned there until late March of 1865.  Then, in early April, a deal to exchange Union prisoners for Confederate prisoners was struck.  The POW parolees were marched to Parole Camp Fisk, near Vicksburg, Mississippi.  On April 11, they arrived at Camp Fisk.

On April 24, 1865, about 2100 of the parolees, including James, were herded on board the Steamboat Sultana.  The passenger capacity of the side-wheel river boat was only 376, so with a total of more than 2400 on board, the boat was severely overloaded.  Add to this the fact that one of the river boat’s four boilers had to be patched because of a leak, a great deal of trouble was brewing.  The steamboat departed Vicksburg on the evening of April 24, and headed north on the Mississippi River fighting against the currents of one of the worst spring floods in history.  On April 26, the boat pulled in to Helena, Arkansas, and then headed on toward Memphis, Tennessee.  About 7:00 p.m., the Sultana reached Memphis and off-loaded 120 tons of sugar from the hold.  The Sultana took on a load of coal, and about midnight headed up the Mississippi again.  Around 2:00 a.m. of April 27, 1865, when the riverboat was about seven miles north of Memphis, one of the boilers exploded, followed in rapid succession by two more boilers.  Many of the parolees were immediately catapulted from the Sultana into the frigid waters.  Many of those drowned or died of hypothermia.  Those who remained on board were severely burned, and many of those died.  Corporal James K. Estes was among the more than 1850 parolees and other passengers who lost their lives due to the explosion of the Steamboat Sultana.  His body was never recovered. 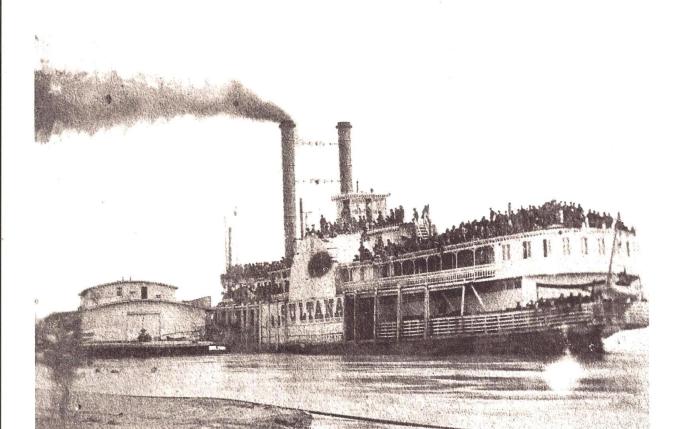 Corporal James K. Estes never received a burial, and has no tombstone, but there is a memorial in Knoxville, Tennessee to all those who lost their lives in the disaster of the Sultana.

A ramble by Uncle Thereisno Justice in memory of and honor to Corporal James K. Estes.  I’ll see you down the road.