Since this month is designated as Women’s History Month, I thought it would be appropriate to relate the story of Sallie Williams to my readers.  For a long time I had wanted to tell her story, but was trying to get more information about her.  Obtaining this information would require a trip to the archives of a college in East Tennessee and another related location.  Then I read an article by a genealogist I admire and respect.  Her advice was not to wait for everything to fall into place, just write what you have.  So, as incomplete as it may be, here goes.

Lenora Jane Wilson was born to Elihu C. Wilson and his wife Malinda Jane Duncan on February 18, 1848.  I will point out that this date is verified by the 1850 United States Federal Census, as well as that of 1860.  Elihu Wilson was my 3rd Great Uncle and Malinda Jane Duncan was my 3rd Great Aunt before they were married as I am related through both the Wilson and Duncan families.  Therefore, Lenora Jane Wilson was my 1st Cousin (3 x removed).  Lenora Jane’s birthplace was Petros, Morgan County, Tennessee.  At some point in time, Lenora Jane came to be called Sallie, and by the age of twelve her family lived in a rural area near Huntsville in Scott County, Tennessee.  It was her job to help her mother with the housework and help in the upbringing of the younger children.  Except for attending school, Sallie performed these duties for her mother until her youngest brother was about eight years old.

Sallie was probably considered somewhat of a spinster because at the age of 30 she was still not married, but on February 7, 1879, she was married to R. H. Williams in Morgan County, Tennessee.  Their first child, Samuel Wilson Williams was born on November 10, 1879.  A daughter, Malinda Jane Williams was born in Petros on May 1, 1881, and a second son, William Frank Williams, was born on May 8, 1883 in Petros.  Sometime in the years between 1883 and 1900, R. H. Williams deserted his wife and children leaving Sallie to be the sole support of her family.  I am sure that she relied a great deal on her parents and other close family to help with the children, but what might have taken a lesser person down just made her stronger.

In 1930, Sallie, who had reassumed the Wilson name, was living with her son Frank and his wife Nannie on Beech Fork Road, and their next neighbor was my Great Uncle Houston, his wife Millie and their son, Samuel Houston Jr.  And, Julia Ann Stonecipher Kelly and her children lived on the Kelly Farm just down from them.  At some point, Sallie took up playing the fiddle and became quite good at it.  She also took up something else, as she began to smoke a pipe.  Her fiddle is referred to by immediate family as a Stradivarius, but I have no real proof that it indeed was.

About this time in her life, Sallie got her Fifteen Minutes of Fame, as she was interviewed by the noted columnist Bert Vincent for his article in the Knoxville News-Sentinel.  For years, even after he tried to retire, Bert Vincent wrote his “Strollin” column.  He featured stories about not- so- famous but interesting people in East Tennessee.  His article about “Aunt Sallie Williams”, as she was referred to by the people in Morgan County who knew her, took up more than one page and included several pictures of her.  Among those pictures were those of her smoking a pipe and playing her “Stradivarius Fiddle”.

This clipping was found in some of my Mother’s papers and I think it came from the Morgan County News.

Although she was my cousin, I chose to utilize the name “Aunt Sallie” because it denotes a type of affection not bestowed on many people.  Aunt Sallie Williams lived a very long and successful life and was never a burden to anyone.  She raised three children who were married and lived productive, law-abiding lives.  On March 22, 1949, at the age of 101, Lenora Jane “Sallie” Wilson Williams died while living with her youngest son and his wife.  She was buried on March 24, 1949 in Union Baptist Church Cemetery in the Joyner Community of Morgan County, Tennessee. 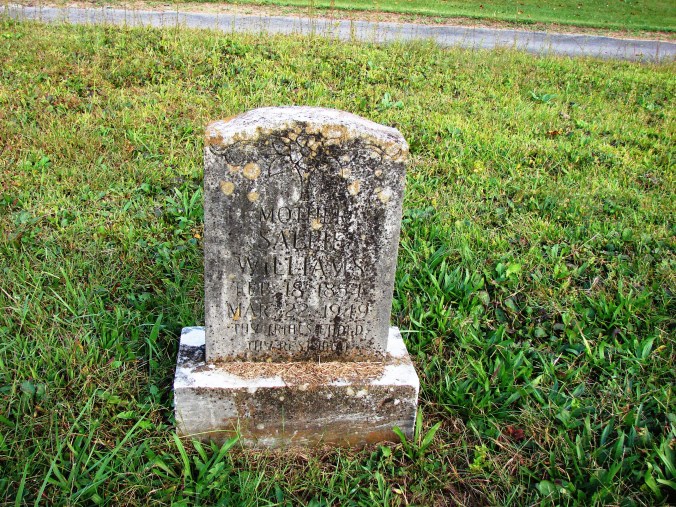 Sallie’s Headstone in Union Cemetery. Her sons and daughter are buried nearby.

She died of old age and there was no illness noted on her Death Record.  Her Death Record, signed by County Physician A. M. Huling, gives her birth year as 1854, however Census Records prove she was born in 1848.  There is some longevity in this family as her son Sam lived to be 97 years old, her son Frank lived to be 94, and Malinda Jane lived to be 89. 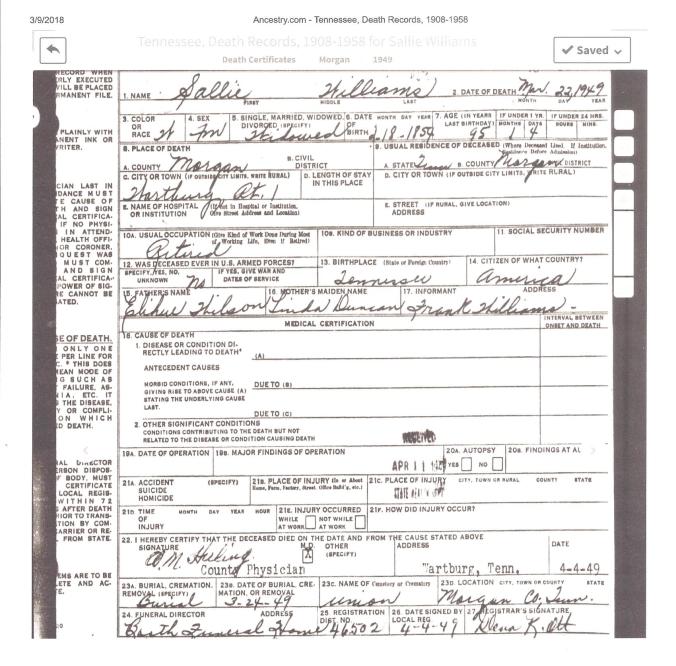 Thanks to Ancestry.com and the Tennessee State Library and Archives for this Death Record.

I would have loved to have made the acquaintance of Sallie, but I was not even three when she died.

With that in mind, I’ll see you on down the road.

On this day 182 years ago, 41 delegates from across what is now the state of Texas came together at a convention held at Washington-on-the-Brazos to discuss and adopt a Declaration of Independence from Mexico.  Mexico had lured many settlers from the United States to take up residence in Tejas y Coahuila as it was known, and had made promises to the people who resided in that vast area.  These promises were never intended to be adhered to, and the Texians were ready for change.  At the convention, Richard Ellis was chosen as the president. A declaration very similar to the July 4, 1776 Declaration of Independence was drafted and signed  by all attendees on March 2, 1836.  Two of the people who signed the Declaration of Independence which created the Republic of Texas were Francisco Antonio Ruiz and Jose Antonio Navarro.

This is a replicated version of the building where the convention to draft a declaration of independence took place. It is located at Washington-on-the-Brazos just off the Brazos River in Texas. If you have never been here, a visit is in order.

Even prior to the convention at Washington, on February 23, 1836, a battle of Texians assembled inside the grounds of the Alamo fortress against a growing number of Mexican soldiers had begun.  The force defending the Alamo was under the joint command of Colonel James Bowie and Lt Colonel William Barrett Travis and included a group of Tennesseans under the command of former United States Congressman David Crockett.  Their group was outnumbered about 10-1.  For several days the freedom fighters were able to fend off the Mexican soldiers with cannon, musket, and pistol fire.  But, by March 5, General Jose Antonio Lopez de Santa Anna had his full force of over 1800 trained soldiers positioned and ready.  On March 6, the Mexican army attacked from the north, west, and south of the Alamo.  The entire battle lasted only about an hour and a half, and afterward there were 182 Texian freedom fighters dead inside the grounds of the fortress.  There were a few women, children, and slaves cowering inside the mission we now know as the Alamo.  Santa Anna allowed these people to leave so they could tell of his victory.  He also demanded that the bodies of the slain defenders of the Alamo be doused in oil and burned.  All of these actions would soon come back to haunt the Napoleon of the West.

This is the Alamo today, the Shrine of Texas Independence. If you have never visited the Alamo please consider a vacation to San Antonio. While there you can also see the River Walk, the Spanish Missions, and the Mercado.

The final stanza of this glorious song took place some days later, after General Samuel Houston had retreated his army across the vast expanse of Texas until he had the army of the President of Mexico, General Jose Antonio Lopez de Santa Anna, where he could defeat them.  On the plains surrounded by the San Jacinto River, the Mexican Army of over 1500 soldiers was ordered to camp overnight.  During the night the army of General Houston, amounting to only 800 soldiers, was able to encircle the larger Mexican army, and prepared to attack.  Early on the morning of April 21, 1836, the order to attack was made. The great and powerful Santa Anna and his army were caught completely by surprise.  Over half of the Mexican troops were killed by the freedom fighters who attacked yelling “Remember the Alamo”.  The entire battle lasted only about 18 minutes, and the soldiers not killed were taken captive.  Among those captured was Santa Anna.  The Battle of San Jacinto is recognized in history as one of the most decisive battles of all time.

This is a modern day replica of the cabin where the treaty giving Texas its independence from Mexico was signed. 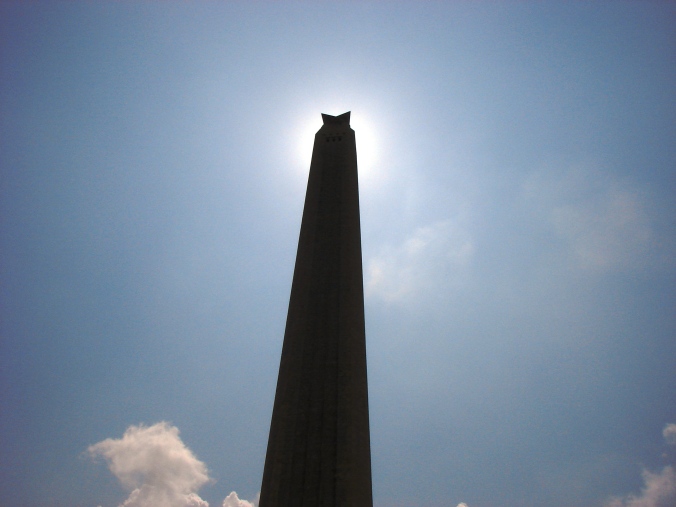 This is the San Jacinto Monument. I am looking up as God is looking down upon Texas.

Texas is the only State in the United States of America that was once a country, although Hawaii was once a kingdom.  Also something that needs to be said is that the men who battled against the Mexican army at the Alamo came from just about every state in the then United States and from European countries.  Every time I visit the Alamo, I am amazed by the variety of people from around the world who are also there in about as much awe and reverence as I.  The last time I was there I encountered Germans, English, Polish, Middle Eastern, Japanese, and even a few Texans.