On this day 182 years ago, 41 delegates from across what is now the state of Texas came together at a convention held at Washington-on-the-Brazos to discuss and adopt a Declaration of Independence from Mexico.  Mexico had lured many settlers from the United States to take up residence in Tejas y Coahuila as it was known, and had made promises to the people who resided in that vast area.  These promises were never intended to be adhered to, and the Texians were ready for change.  At the convention, Richard Ellis was chosen as the president. A declaration very similar to the July 4, 1776 Declaration of Independence was drafted and signed  by all attendees on March 2, 1836.  Two of the people who signed the Declaration of Independence which created the Republic of Texas were Francisco Antonio Ruiz and Jose Antonio Navarro. 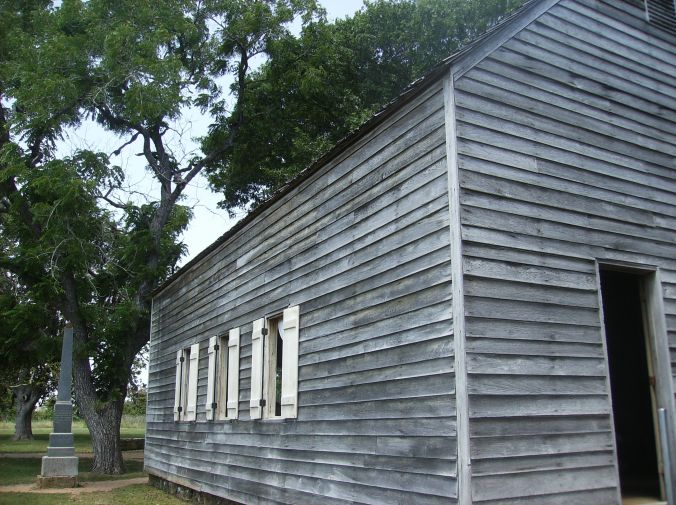 This is a replicated version of the building where the convention to draft a declaration of independence took place. It is located at Washington-on-the-Brazos just off the Brazos River in Texas. If you have never been here, a visit is in order.

Even prior to the convention at Washington, on February 23, 1836, a battle of Texians assembled inside the grounds of the Alamo fortress against a growing number of Mexican soldiers had begun.  The force defending the Alamo was under the joint command of Colonel James Bowie and Lt Colonel William Barrett Travis and included a group of Tennesseans under the command of former United States Congressman David Crockett.  Their group was outnumbered about 10-1.  For several days the freedom fighters were able to fend off the Mexican soldiers with cannon, musket, and pistol fire.  But, by March 5, General Jose Antonio Lopez de Santa Anna had his full force of over 1800 trained soldiers positioned and ready.  On March 6, the Mexican army attacked from the north, west, and south of the Alamo.  The entire battle lasted only about an hour and a half, and afterward there were 182 Texian freedom fighters dead inside the grounds of the fortress.  There were a few women, children, and slaves cowering inside the mission we now know as the Alamo.  Santa Anna allowed these people to leave so they could tell of his victory.  He also demanded that the bodies of the slain defenders of the Alamo be doused in oil and burned.  All of these actions would soon come back to haunt the Napoleon of the West. 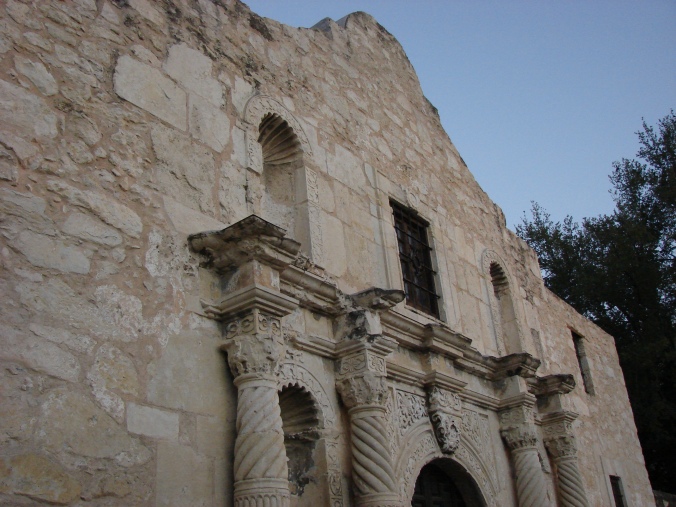 This is the Alamo today, the Shrine of Texas Independence. If you have never visited the Alamo please consider a vacation to San Antonio. While there you can also see the River Walk, the Spanish Missions, and the Mercado.

The final stanza of this glorious song took place some days later, after General Samuel Houston had retreated his army across the vast expanse of Texas until he had the army of the President of Mexico, General Jose Antonio Lopez de Santa Anna, where he could defeat them.  On the plains surrounded by the San Jacinto River, the Mexican Army of over 1500 soldiers was ordered to camp overnight.  During the night the army of General Houston, amounting to only 800 soldiers, was able to encircle the larger Mexican army, and prepared to attack.  Early on the morning of April 21, 1836, the order to attack was made. The great and powerful Santa Anna and his army were caught completely by surprise.  Over half of the Mexican troops were killed by the freedom fighters who attacked yelling “Remember the Alamo”.  The entire battle lasted only about 18 minutes, and the soldiers not killed were taken captive.  Among those captured was Santa Anna.  The Battle of San Jacinto is recognized in history as one of the most decisive battles of all time. 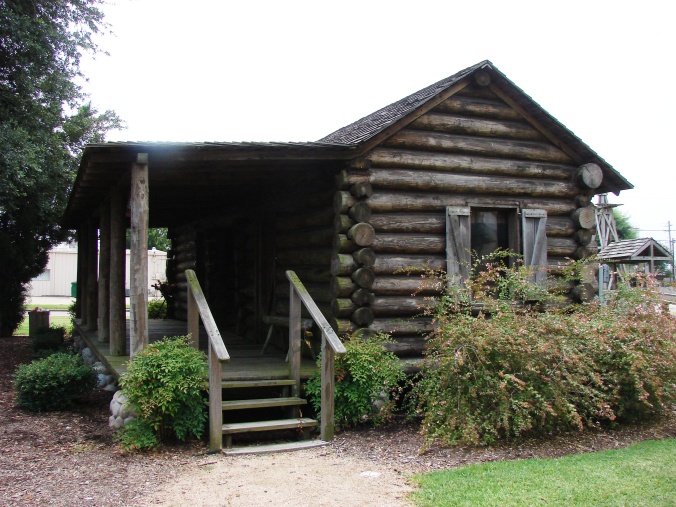 This is a modern day replica of the cabin where the treaty giving Texas its independence from Mexico was signed.

This is the San Jacinto Monument. I am looking up as God is looking down upon Texas.

Texas is the only State in the United States of America that was once a country, although Hawaii was once a kingdom.  Also something that needs to be said is that the men who battled against the Mexican army at the Alamo came from just about every state in the then United States and from European countries.  Every time I visit the Alamo, I am amazed by the variety of people from around the world who are also there in about as much awe and reverence as I.  The last time I was there I encountered Germans, English, Polish, Middle Eastern, Japanese, and even a few Texans.