In approximately 1852, Sarah Stonecipher and her husband John Chastain Reese, brought their children; Rebecca T., Isaac N., Francis Jefferson, and John Charles Galloway Reese by covered wagon from the beautiful mountains of Morgan County, Tennessee to the flat prairie land of Kaufman County, Texas.  They also brought with them two slaves, Rhodie and Ann.  Sarah was the sister of Mahattie Stonecipher who married Abraham Justice.  By 1860, the Reese family was living at Turner’s Point, named for Elisha Turner who had received a land grant from President Anson Jones for his service to the Republic of Texas.  Their son John Charles Galloway Reese was living in another part of Kaufman County, near the McClendon community, with his wife Martha Tudor and their children.  Alfred Agee Reese was born to their union on October 6, 1859.  In 1862, JCG Reese enlisted in Company D, 20th Regiment, Texas Cavalry of the Confederate States of America, and was assigned to Fort Washita, Oklahoma.  This fort was originally a US fort, but was abandoned by the Union Army when the Civil War began.  It was occupied by the Confederacy during the extent of the Civil War.  In February of 1864, John Charles Galloway Reese died at the fort, and family members attribute his death to pneumonia.

Alfred Agee Reese grew up in Turner’s Point, Texas with his mother and brothers and sisters.  In 1876, the citizens of the unincorporated community of Turner’s Point were informed a name change for their community was required because there was confusion between it and another Post Office with  a similar name.  A local merchant, Maston Ussery suggested the name Poetry, because he said the area in springtime reminded him of a poem.  The suggestion was accepted, and thus became Poetry, Texas.  By 1880, Poetry had an estimated population of forty.

On February 15, 1881, Alfred Agee Reese and Fannie Bryan were married and took up residence in the newly formed Rockwall County.  In about 1885 Byrd Royse became heir to land in Rockwall County and had it platted for a town.  He also sold the right of way to the Missouri, Kansas, and Texas Railway to run through the town.  The first lot in the town that he sold was sold to Alfred A. “Alf” Reese and Al Royse, his nephew.  Alf Reese and Al Royse decided to build a general store on the property.  They hauled lumber and other building materials from Terrell on a wagon drawn by oxen.  When the two men  finished the building, they brought in merchandise from Dallas.  With more businesses being built, and others being relocated from Fate and Rockwall, and people moving into the area because of the railroad, their new general store blossomed.  Alf Reese remained a partner to Al Royse for some time, but eventually sold his part in the business to another member of the Royse family.  By 1886, Royse City, named for Byrd Royse,  had a Post Office placed there.  The actual home of Alf and Fannie Reese remained in Poetry during these days and they had had three children, two boys and a girl, although their second son had died at the age of two.

During the years between 1887 and 1898, Alf Reese owned or operated ranches in Greenville and Anson, Texas, but by 1899 the family was back in the Royse City area.  On October 4, 1899, Fannie Reese died in Poetry, Texas.  Alf maintained that he had eight children by Fannie, but I have only found seven documented.  The children of this marriage that I was able to document are George Washington Reese, Thomas A. Reese, a daughter Tennie Reese, Charles Daniel Reese, Walter Will Reese, Anson Jones Reese, and Troy Dee Reese.  By 1900 the population of Royse City stood at about 1000 and there were a total of about forty businesses and among them were two cotton gins and a gristmill.  Also in 1900, Alf Reese was instrumental in forming the First National Bank of Royse City, and became the vice president of that bank.  On May 23, 1900, Alf Reese married his second wife, Virginia Lee Fitzpatrick.  Between the years of 1900 and 1920, Alf and Virginia had seven documented children.  They were Ruby Reese, Alfred Agee Reese Jr., James Lennie Reese, Jeanette Reese, Robert Carol Pender Reese, Harry Edwin Reese, and Flurnoy Wilson Reese.  In addition to being a bank vice president, Alf Reese served as the president of the school board for about ten years.  In 1898 there was only one school in Royse City that employed four teachers and had 204 students recorded.  In a newspaper article from the Greenville Banner dated May 28, 1956, Alf Reese is quoted as saying “We built some new schools, and when we saw the need of a Negro school we put that up too.”  In an article in the Royse City American, author Zaner Robinson said “Alfred Reese was a builder of Royse City and truly a pioneer.”

In the next few years, Alf Reese owned or operated ranches near Abilene, Texas, San Angelo, Texas, two sites in Oklahoma, and had several farm holdings in and around the Royse City area.  He also helped to found the First State Bank in Royse City, and then served as the vice president of that bank for a time.  In later years, he was a stockholder in the Citizens State Bank which was an outgrowth of the First State Bank.  There is an unsubstantiated assertion that Alf Reese once served as the mayor of Royse City.  Even if this is not true, he was involved in many aspects of this small Texas prairie town.  In his own words “I have always tried to help in anything good for the community.”

By the time Alf Reese was 96 years old, he was confined to a wheelchair.  Just seven months short of his 99th birthday, on March 25, 1958, Alf Reese died from lobar pneumonia in his beloved home in Royse City, Texas. He was buried in the Royse City Cemetery.  Both Poetry and Royse City remain to this day.  Poetry has never been incorporated and has a population under 600.  Royce City sits just north of Interstate 30 and currently has a population just under 11,000. 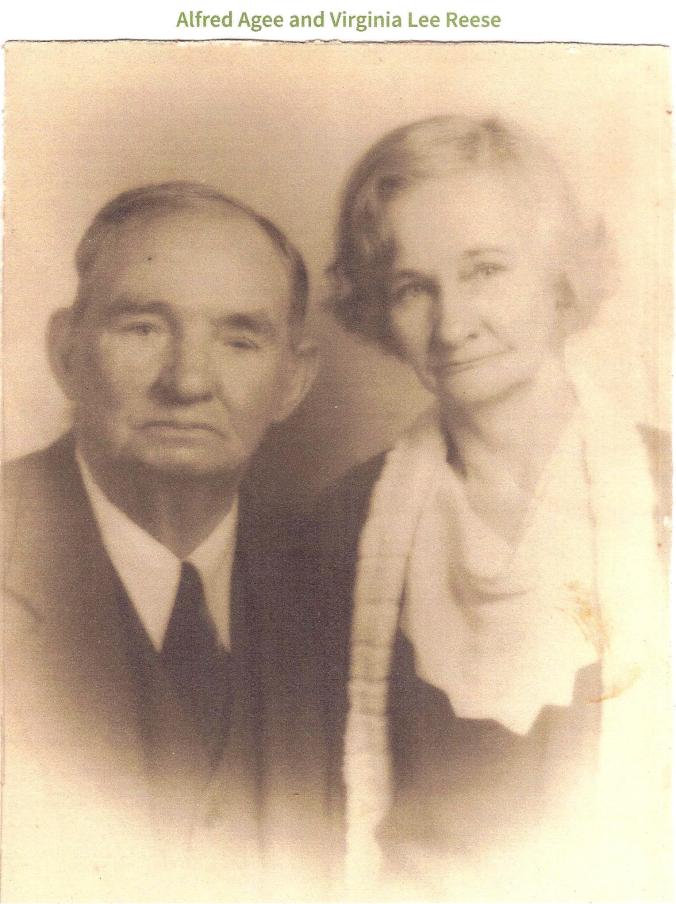 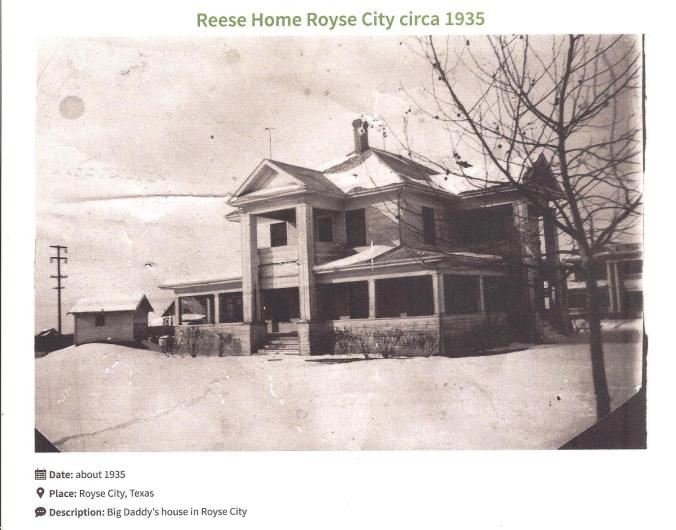 The home where Alf, Virginia, and family lived.

If ever you find yourself on I30 east of Dallas, just pop in for awhile and take in the sights of Royse City, Texas.  Many of the Reese family are buried in the Royse City Cemetery.  Also, there is the Zaner Robinson Historical Museum, dedicated to the history of Royse City between 1920 and 1960.  There is one more photo below that warrants a look.

Just one more ramble by Uncle Thereisno Justice.  I’ll see you down the road.