Sarah Stonecipher and her husband, John Chastain Reese, and the youngest members of their family had traveled from Morgan County, Tennessee by covered wagon in about 1852 to make their new home in Kaufman County, Texas.  They built a home there in what was then called Turner’s Point and now is known as Poetry, Texas.  Sarah was the daughter of Joseph Marion and Salome Fairchild Stonecipher.  The direct lineage from Sarah and John is as follows:  Samuel Stonecipher Reese and Marsha Rena Muse >James Washington Reese and Amy Frances Pool >Henry Grady Reese and Grace E. Watson >William Don Reese.  Never could they have known that one day a 2nd great grandson of theirs would be a Deputy Sheriff for Dallas County and whats more give up his life in service of his community.  But such was the case.  William Don Reese, who was known as Donny by family and friends, was born in Dallas, Texas on October 15, 1939.

The day after Valentine’s Day 1971 began with Ellis County Sheriff’s Deputies responding to information obtained concerning a burglary in Ellis County.  A helpful neighbor had witnessed a burglary and had written down the license plate number of the car involved.  This led the Ellis County Sheriffs Department to Rene Guzman and Leonardo Lopez who were also suspects in other burglaries and used the burglaries to support their drug use.  They obtained an arrest warrant and Sheriff’s Deputies Wendell Dover and A. J. Robertson were dispatched to arrest Guzman and Lopez.  They were accompanied to where the burglars were holed up by Dallas County Sheriff’s Deputy Samuel Infante who spoke Spanish.  When the three arrived at the residence at 2810 Ingersoll St. in Dallas, they called for a search warrant.  Sometime between the call and the arrival of the search warrant the three deputies were overwhelmed by the criminals and their hands were tied.  Deputies William Reese and A. D. McCurley were tasked with the assumed routine assignment of delivering the search warrant to the residence of the criminals.  When the two knocked on the door a voice from inside said “come in”.  As the door was opened, Reese and McCurley saw that the other three deputies were tied up and that guns were trained on themselves.  They too soon found their hands bound.

All five deputies were prodded and herded to one of the squad cars.  Deputies Dover, McCurley, Reese, and Robertson were forced into the back seat while Deputy Infante’s hands were loosed and he was forced to drive the squad car.  As one of the criminals held his gun on the four in the back seat, the other had his gun shoved into the side of Infante as he drove where he was instructed.  As Deputy Infante was driving to the Westmoreland Bridge over the Trinity River as ordered, Deputy Donny Reese was freeing his hands from their bindings as he pleaded with the kidnappers not to kill anybody.  As the car got to the bridge, Infante was ordered to turn onto an unpaved road that ran along the Trinity.  This area which is north of Singleton in West Dallas is known as the Trinity River Bottoms and has long been associated with dumping trash, bodies, and old tires.  He was then ordered to stop the car, and at that point they all knew they were going to die.  All the deputies were forced out of the car, and Donny Reese saw his chance to make a move.  He swung at Guzman but as he did, Guzman fired several times at close range, killing him.  Deputy Infante was also shot and killed as was Deputy Robertson.  But in all the excitement Deputy McCurley was able to launch himself down an embankment toward the river.  McCurley was eventually able to untie his hands and run until he found a street and was picked up by a motorist and taken to a service station from which he called the police.  He borrowed a firearm from the service station attendant and made his way back to the murder scene with the Dallas Police officers.  There they found the badly wounded Deputy Wendell Dover stumbling through the underbrush.  He was transported to Dallas’ Parkland Hospital.  They also found the bodies of Deputy A. J. Robertson, Deputy Samuel Garcia Infante, and Deputy William Don Reese who sacrificed their lives in the line of duty for the people of Ellis and Dallas Counties.  It should have been a routine arrest but for a deranged two-bit criminal who saw himself as if he were Al Capone.  And at this point began one of the most involved manhunts in the history of Dallas County. 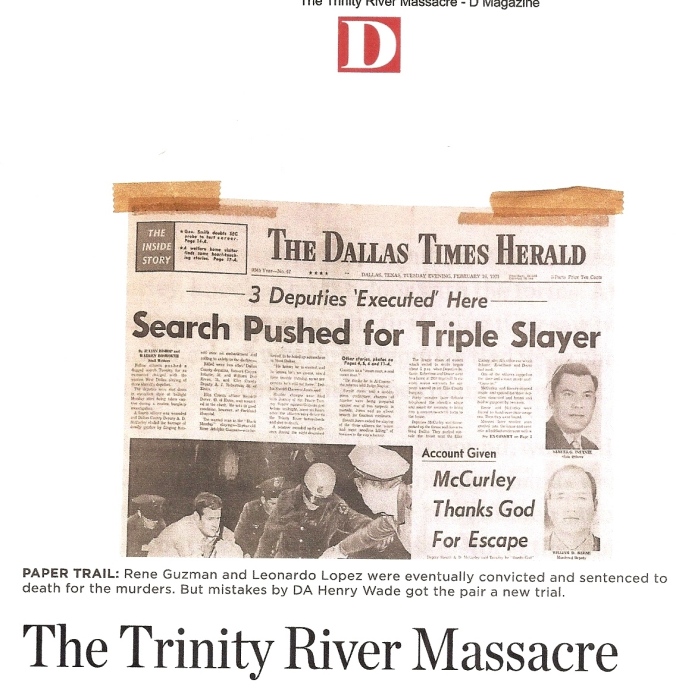 A picture from D Magazine article concerning the Trinity River Massacre in the issue from January 2016. Much of the information for this post was gleaned from the article.

The Dallas Police Department, the Dallas County Sheriff’s Department, and Texas state agencies initiated a manhunt that covered the entire state of Texas and delved into Mexico and states bordering Texas.  For several days the search was unfruitful and many feared the murderers would never be apprehended.  Yet, thanks to an informant, the two murderers were located.  The area surrounding the rooming house at 4627 San Jacinto, just off Ross Avenue, was cordoned off and law enforcement officers converged upon the room where the killers were holed up.  Guzman and Lopez were arrested and jailed awaiting prosecution.  After all the preliminaries it was determined that an unbiased jury in Dallas County was not possible, so there was a change of venue and the trial was set for Bell County.

The trial was held at the Bell County Courthouse in Belton.  An Assistant District Attorney for Dallas County was the actual prosecutor in the case, but when it came time for the closing argument career politician and Dallas County DA Henry Wade, who was up for re-election, decided to do the honors.  His argument was muddied with erroneous statements and embellishments of facts.  It took the jury little more than an hour to return a guilty verdict and to render a death sentence to Rene Adolfo Guzman and Leonardo Ramos Lopez on June 29, 1971.  The verdict was appealed and the Texas appellate court overturned the case because of the grandstanding of Henry Wade and a new trial was ordered.  Exactly one year after the end of the first trial, in the case of Furman v. Georgia, the United States Supreme Court struck down the death penalty.  When the second trial ended Guzman and Lopez were found guilty on two counts of murder and one count of murder with malice, but because the death penalty had been done away with they each got life sentences.

Rene Guzman is now 82 years old and is serving his life sentence in the Darrington unit of the Texas Department of Criminal Justice located near Sandy Point in Brazoria County.  Leonardo Lopez, who was paroled in 1991 but soon wound up back in prison, is now serving his life sentence in the Charles T. Terrell unit near Rosharon in Brazoria County.  This is little consolation for the families who lost their loved ones in the senseless act of these brutal murders.

When I discovered that no one I mentioned this to had ever heard of the Trinity River Massacre, I decided that the story needed to be retold.  I found the D Magazine story and that was my launch pad.  I hope you were somewhat gratified by this rendering of the narrative.  Incidentally there is the Sheriff’s Department Fallen Deputy Memorial Monument at 600 Elm St. in downtown Dallas in Founders Plaza.

I hope to see you on down the road