Ezra Jr, who came to be known as Pat was living with his family in the community of John Sevier in Knox County in 1935, and was attending Central High School in Knoxville.  On November 14, 1936, when Pat was only sixteen years old,  his father was killed in an automobile accident.  In 1937 Pat graduated from Central High School in Knoxville and then enrolled in the University of Tennessee.  While at UT he played on the Volunteer baseball team as a pitcher.  Then in 1941 after his college days, Pat participated in the Knoxville News Sentinel’s annual “Baseball School” and was subsequently approached by the Knoxville Smokies, a minor league baseball team, and assigned to their Class D Appalachian League team the Elizabethton Red Sox which was a farm team of the Boston Red Sox.  While with this team, he pitched a no-hit, no-run game.

Then in 1942, his life started a new chapter when he joined the US Navy to do his part in World War II.  Pat was assigned to the Naval Air Training Base at Corpus Christi, Texas as their Athletic Instructor.  While there, he was also a pitcher for the NATB baseball team, and as such he played against other Army, Marines, or Navy baseball teams.  In all of the games he pitched while in the Navy, one stands out.  In 1944, his Corpus Christi NATB team played the Pensacola Marine Base team.  Ted Williams, who was training as a pilot, played for the Pensacola team.  Pat McGlothin faced Ted Williams seven times in that game, and struck him out five times, walking him the other two.  The game went 19 , yes nineteen, innings.  Pat tied the game up in the 17th inning with a hit and then won it in the 19th with another hit.  And yes, he did pitch the entire game.

After his stint with the US Navy during WWII, he returned home and then was married to Dorothy V. Lindsay.  In 1946, Pat received a letter from the Brooklyn Dodgers to attend their Spring Training Camp at Vero Beach, Florida.  From this spring training camp, he was assigned to the Mobile, Alabama Bears, a Dodgers farm team.  He pitched for the Bears through 1947, when they won the Southern Association pennant.  For the 1948 season, he was assigned to another Dodgers farm team, the St. Paul Saints of the American Association.  During his stay with these two teams, his record was 43 wins and 24 losses.

Shortly after this, Ezra Malachi “Pat” McGlothin, born in Coalfield, was called up to the Major Leagues to play for the Brooklyn Dodgers.  His debut game was on April 25, 1949. Then on May 7, 1949, he came on in relief of Ralph Branca.  His catcher was Roy Campanella.  Gil Hodges was on first.  Pee Wee Reese was shortstop.  Jackie Robinson was on second.  Duke Snider was in the outfield.  This was a Who’s Who of Professional Baseball Notables.  For Pat, this was his first and only win in the Majors.   That team took the National League Pennant and then lost to the New York Yankees in the World Series.  Then in 1950 Pat signed a contract to play another year with the Dodgers.  In all, he pitched 8 games for the Brooklyn Dodgers with a won/loss record of 1-1. 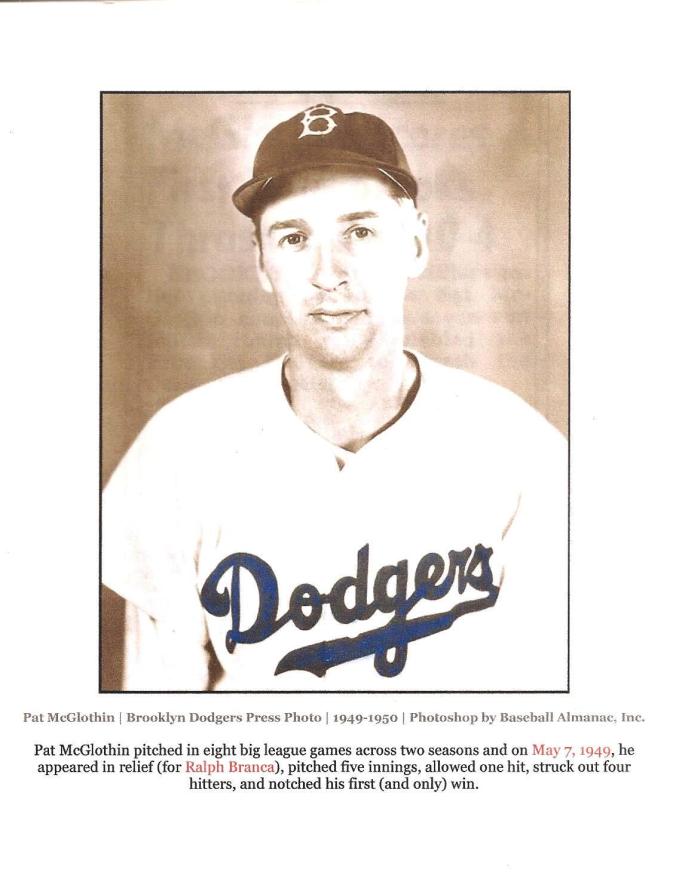 The one and only win in the majors

After these two seasons with the Brooklyn Dodgers, Pat was sent to the Fort Worth Cats, a farm team of the Dodgers, in the Texas League.  After this assignment he played for the Montreal Royals of the International League, also a Dodgers farm team.  After having surgery for bone spurs in his right elbow, he pitched a few more years for the St. Paul Saints, the Birmingham Barons, and ended his career with the Knoxville Smokies as a manager.  In all in the minor leagues, Pat had 108 wins and 86 losses, and pitched three no-hitters.

In 1954, after departing the world of professional sports, he joined the Mutual Insurance Agency of Knoxville, Tennessee and eventually became the owner of the agency.  Until the age of 90, he served as president and owner of the company, into which he brought his son and daughter and a grandson.  The Mutual Insurance Agency, Inc. is still a viable part of the Knoxville insurance scene.

Just three days shy of his 94th birthday, Ezra Malachi McGlothin Jr. passed away on October 24, 2014.  In the years after his professional baseball career, he was inducted into the Brooklyn Dodgers Hall of Fame by virtue of his being on the 1949 World Series team, the Greater Knoxville Sports Hall of Fame, and a lifetime member of the Major League Baseball Players Association.

There have been multiple holiday feasts and celebrations and a 50th Wedding Anniversary that have delayed this post, but maybe your old uncle is on track again.

I’ll see you on down the road